A Salon on playing theatre at Camden People's Theatre

This was an open event curated and hosted by Coney at Camden People’s Theatre for our network. It sprang from a desire to advance the dialogue around making playing theatre aka interactive theatre. Provocations from Philipp Ehmann, Zoe Svendsen, and Nullo Facchini of Cantabile2 opened proceedings, and we then moved into an open space discussion. 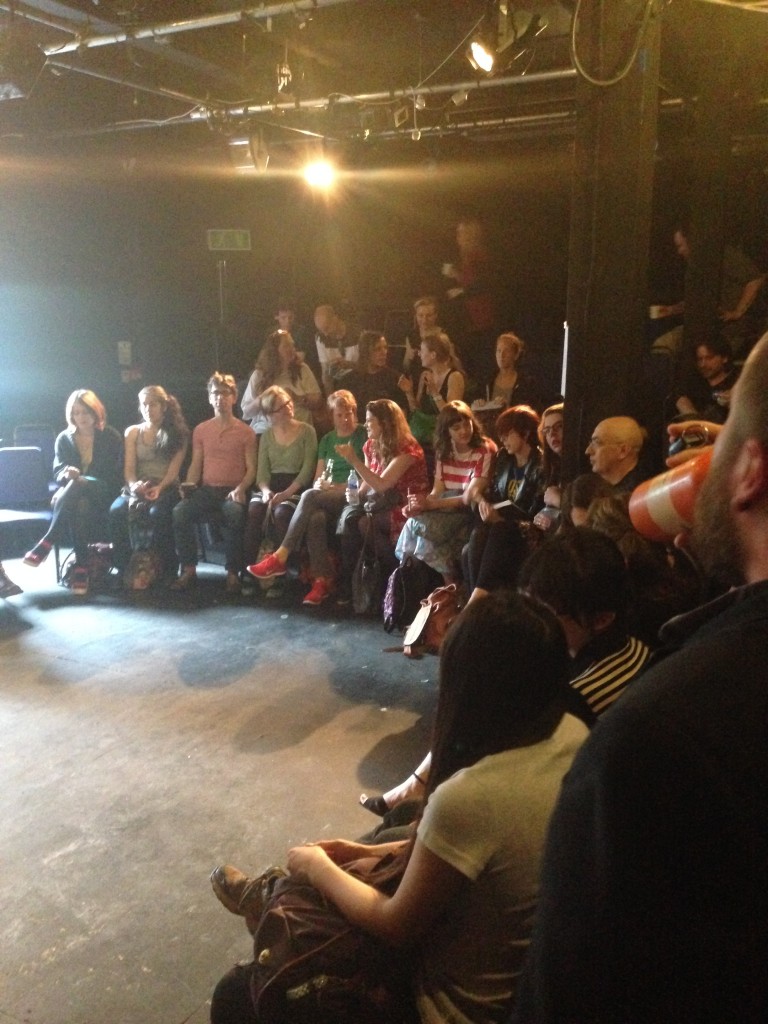 Why we held the Salon

The word ‘interactive’ for starters; it’s frequently confounded and overextended, where does it sit usefully in relation to ‘immersive’ or even to plain old ‘participatory’? I’m preferring ‘playing theatre’ as an umbrella term to describe Coney’s work: theatre where the audience is present and has scope to play if they choose.

And then there’s the notion that interactive theatre is brilliant just because it’s interactive, based often on the intoxicating buzz that can be overwhelming in any first experience of being immersed in a playworld (a buzz that usually wears off though). This notion can go further: “the more interactive the experience, the better it will be”, as if interactivity is some magic ingredient to be added for taste.

I’ve been thinking a lot about the dramaturgy of interactive models, hugely influenced by conversations with the likes of game-designer Paul Callaghan, and Thomas Rosendahl Nielsen, an actual interactive dramaturg met in Aarhus on Coney’s recent networking trip to Denmark (more on that in another post soon). What does a model itself mean? The number of people it involves, the scope of action they have, the impact of those actions inside the greater system of interaction: all of these carry meaning for the work.

For instance, a project I’m developing for Coney codenamed REMOTE has a model which places a playing audience sitting down inside a system that’s like a digital space governed by an algorithm – “we’re trying to help you be more like people like you” – where they are presented with endless freedom of choice but left chasing any meaningful agency. The model is itself reflecting the limits of their agency inside an infinitely scalable system, like the internet but also just like a sit-down audience.

And I’m also thinking a lot on systems themselves as a starting point for devising work, inspired by conversations with Paul Callaghan again and systems theatre-maker David Finnigan. Rather than the weird dichotomy of story versus game, start with the system or the world, then work out where in the world the audience is and what they can do that helps them play the world. Stories then emerge as different journeys to be made or followed through the world; games can act as lenses for sometimes focusing the audience’s play. This is part of a process explored in a workshop on Making Interactive Theatre run recently for Coney with the likes of Tamasha and Ideas Tap (and one soon with Unexpected Exeter Festival).

With all of this bubbling away, it seemed a good shout to open this out. So a salon was called, with a number of invited provocations to set the scene for everyone. Then followed by an open space, inspired of course by Improbable’s Devoted & Disgruntled, as the best way to open out the conversation for people to talk about whatever they want to talk about.

One seed of inspiration for the Salon had been a conversation with Philipp Ehmann, a theatre director and game-designer who’d invited me out to Play:Vienna. We’d talked while he drove me to the airport about the scene in London for playing theatre and the crossover between art and games, and what it might take to grow a scene like that in Vienna. “The dramaturgs are the gatekeepers to the system here” said P, and so we talked about the kind of event that might draw the dramaturgs. It was lovely then to be able to invite P to come from Vienna to the salon to deliver a provocation.

Philipp spoke about the dramaturgy of a playful audience, and his own work with writer Isley Lynn. In a game, the singular player is the most vital part of the dramaturgy so what would it then mean to make every single person in a playing theatre audience integral to the narrative experience?

You can download the audio of Philipp’s provocation HERE. 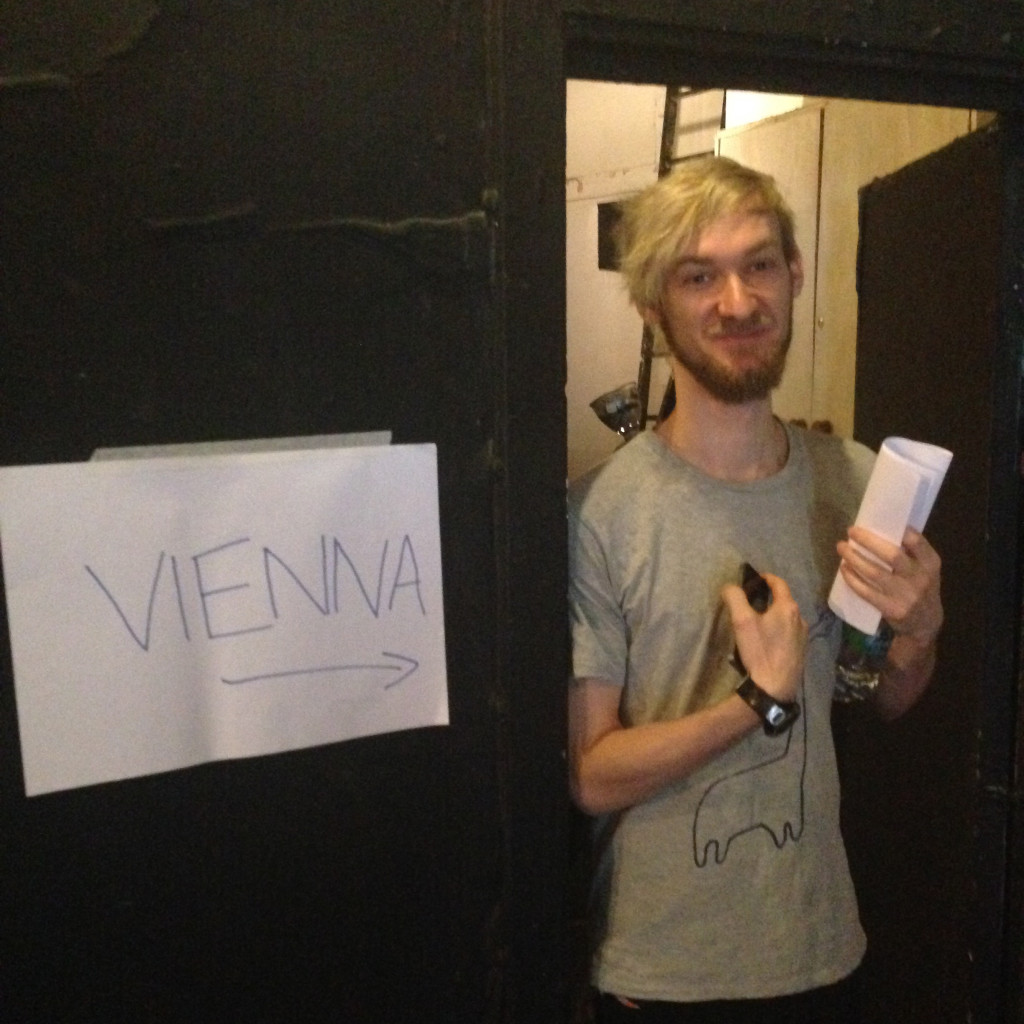 Zoe Svendsen makes her own brilliant interactive theatre for her Cambridge-based company Metis Arts, but also works as a dramaturg. Zoe spoke about where we pay attention, looking at Joe Keller’s outburst against the system in Arthur Miller’s All My Sons –

“Who worked for nothin’ in that war? When they ship a gun or a truck outa Detroit before they got their price? Is that clean? It’s dollars and cents, nickels and dimes; war and peace, it’s nickels and dimes, what’s clean?”

– where we’re not really examining the capitalist system, but the individual psychology of a father trying to exorcise his own guilt in the death of his son. Metis are developing a set of interactive projects called World Factory, including one where they place the audience in the role of the manager of a factory manufacturing shirts, so they are playing the system itself.

You can download the audio of Zoe’s provocation HERE. 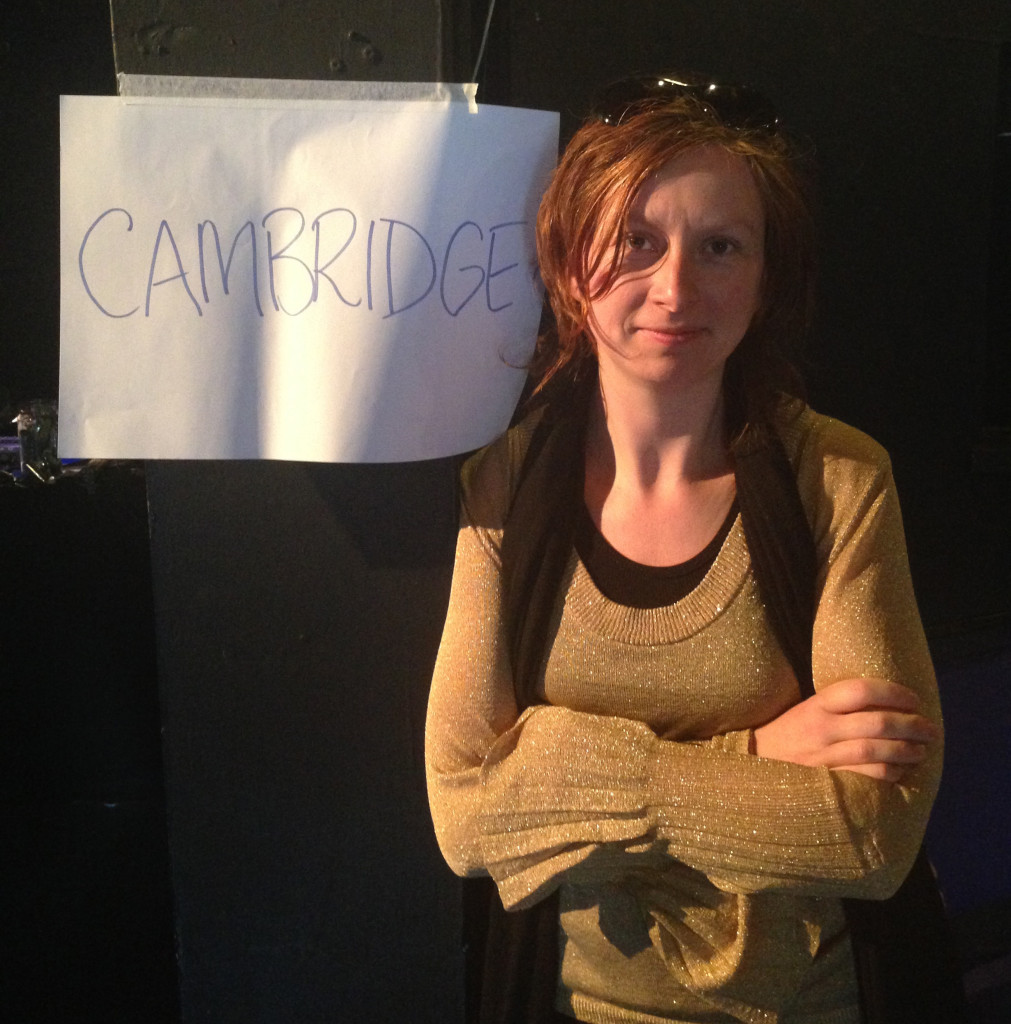 Finally, Nullo Facchini from Cantabile2 spoke about what they call human-specific theatre, work with intimacy and individuality. They brought their beautiful piece Biographies to play in the following scratch night, which I’d experienced at their base in Stege; I asked them for a provocation because I felt the authenticity of the human encounter is central to their work. In their upcoming piece The Happiness Paradox, they are exploring at a bigger scale than one-on-one how to create an emotional dramaturgy between performer and spectators, where the audience “have the responsibility for working with sincerity”. This provocation became an invitation for everyone in the room to play a simple exercise to “find the right eyes”.

You can download the audio of Nullo’s provocation HERE. 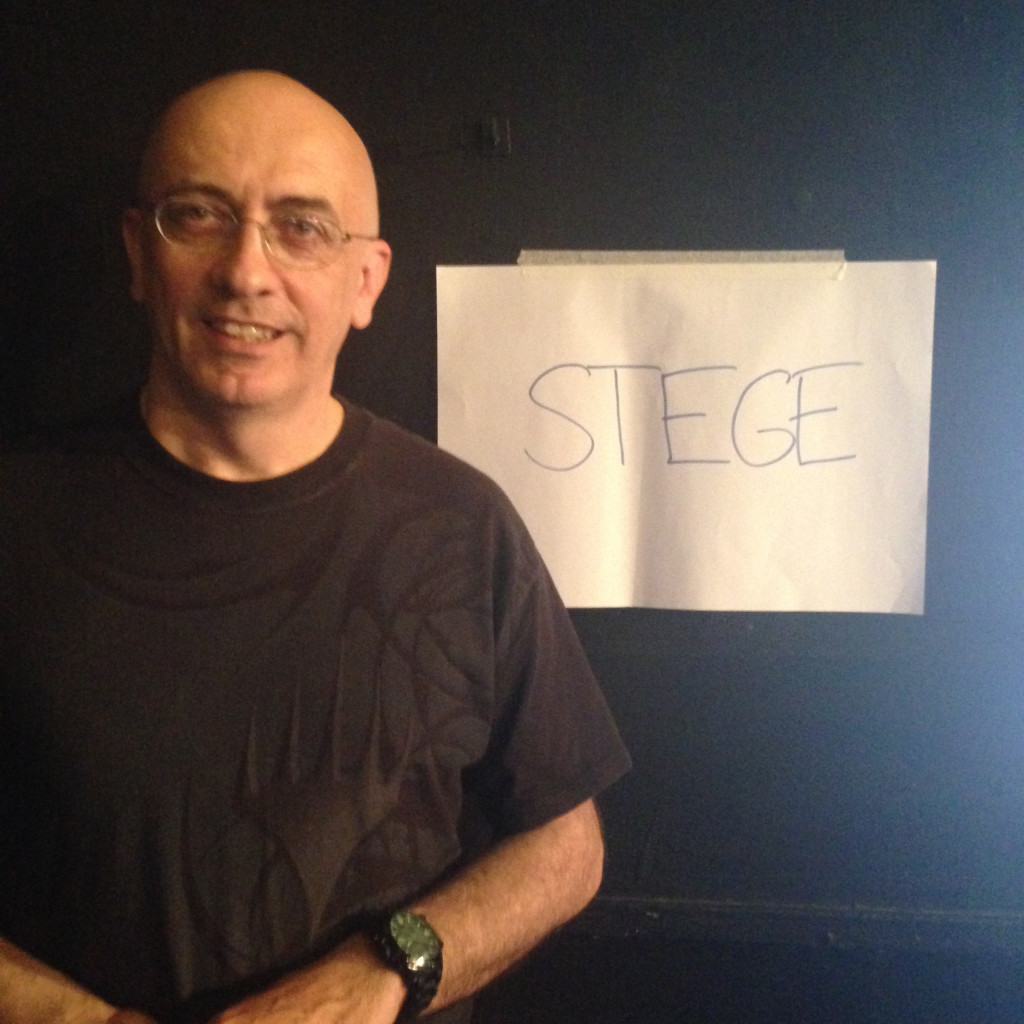 Discussion topics called for the open space were: 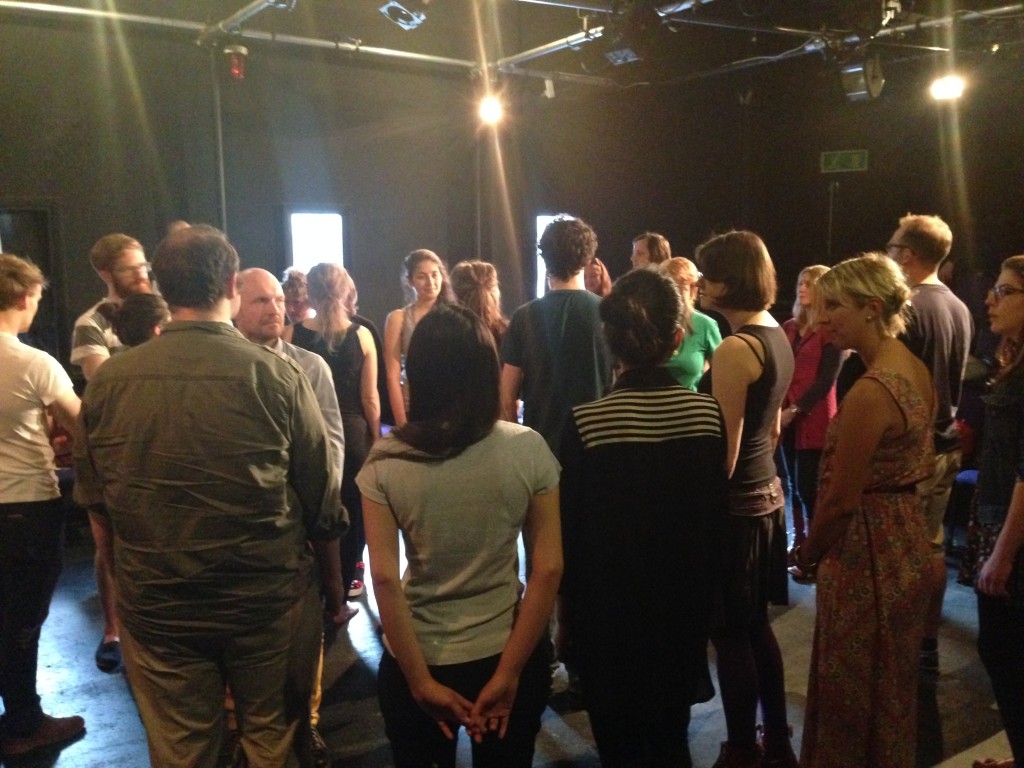 We asked people afterwards to send in anything they had learned, surprising or unsurprising, from their conversations on the day. Here are some responses.

“one of the things that I took away from the day is the concept of ‘agency of engagement’ – which encapsulates really neatly some of the things I’ve been thinking about around the agency and manipulation of the audience during participation (where the audience’s agency is necessarily manipulated to fit within the work, but where the offer of agency is in the choice of how to engage with a work)” Astrid Breel

“It was useful to think about the audience -or individual members of the audience- having a dramaturgy. It was also interesting to see how many of the questions one might ask as part of the dramaturgy of a more ‘traditional play’ were also useful in understanding how an audience might play theatre. The discussion about ethics/ responsibility made me think about how powerful work -and the journey that participants/ audience members can go on- can be when theme and form complement each other.” Rachel Briscoe

“It was very inspiring to experience the performer as the game host/game facilitator and the audience as the players. This concept for the performer/audience relationship opens up for new ways of creating narratives in the theatre and brings the playfulness and liveliness of the theatre back to the forefront.” Sandra Theresa Buch

“A thing I learned: In order to care for audience and performer alike, it is useful to have a very defined ‘end’ point to an experience. I also learned that my temptation to mess with this ‘end’ point is strong and unwaivering ;)” Ellie Robinson

“one of the most memorable things for me was bringing into relief the dramaturgy of the participant.”
Luke Cooper

“…just because an audience is interactive, doesn’t mean they have agency. I think there is a fine distinction that has to drawn, and it’s well worth researching methodologies on this, between audience agency and unethical audience interaction, as well as simply audience interaction that re-enforces old performer-spectator relationships. I agree with Zoe, that there are politics of structures and dramaturgies involved in any kind of theatre and that most kinds of/genres of theatre can leave the audience with some sort of agency. Equally most kinds/genres can take away that agency. “
Philipp Ehmann

• The audience member’s goodwill for the show can produce a pressure in them to “get it right” that isn’t helpful
• Playing theatre can foreground systems and make us aware of the impact they have in a way that traditional theatre often can’t.
• Cantabile reminded me how important sincerity and simplicity are.
Dan Barnard

“The two discussions I participated in were about objects in playing theatre and sport as theatre.  The one about objects was thought provoking and made me think about environmental storytelling, something which Philip Ehmann is trying to develop with his company.  The second was broader but an area that I’m really fascinated in.  I think we needed to separate it out into participatory sports and spectator sports because there’s so much to discuss within each of these.  Daniel Bye mentioned how test match cricket has a similar structure to Greek tragedy.”
William Drew

“My discovery of the day was about the edges of immersive/playing theatre – considering how to define the boundaries of a theatre-maker’s responsibility to their audience/spectactors (including through defining what the financial transaction that grants access represents); the boundaries between the rules of the game and the rules of society and how these jostle for superiority; and the importance of defining the edges of an audience’s experience (ideally with space to decompress afterwards).”
James Hadley

“Probably more of a re-emphasis than a eureka, but I had a re-energised sense of the audience as an organism, the way people talk about the world as an organism in Gaia theory. This collection of human minds and bodies pulls together and pulls apart and has sometimes hugely different experiences – but those experiences are intimately, intricately and inextricably connected. Work which recognises this and uses it as part of the creative process is often playful work, and it’s the kind of work I spent the weekend thinking about.”
Daniel Bye

Thanks to everyone who participated, and to CPT for hosting us.